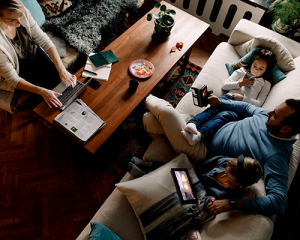 WiFi 6 is here, and devices supporting the new standard are starting to hit store shelves, both off- and online. WiFi 6 promises to bring faster speeds and greater capacity… but there are some skeptics who believe that we aren’t quite ready for WiFi 6 and that its benefits will only be appreciated later rather than sooner.

We disagree. Below, we’ll tackle many of the misconceptions about WiFi 6 and tell you why we believe now is a great time to make the switch and start your transition to using the new standard. But first, what exactly is WiFi 6? Now, time to dispel some of the common myths that surround WiFi 6:

Myth #1: There aren’t many WiFi 6 devices on the market WiFi 6 enabled devices are readily available today from laptops on the market using Intel’s 10th-gen chips to the latest and greatest smartphones such as Samsung’s Galaxy S10 & Note 10, and Apple’s iPhone 11. With market movers such as Samsung, Apple, and Intel onboard with WiFi 6, you can expect other industry leaders to recognize the benefits of the latest WiFi technology and launch products with WiFi 6.

Myth #2: Most devices will not work with WiFi 6 routers
WiFi 6 routers are 100% backwards compatible with WiFi 5 and older WiFi devices. While you may not get to experience WiFi 6 from day one, you can make sure that your network is ready for new devices with WiFi 6 sooner than later.

Myth #3: WiFi 6 is blazing fast, but only if you have 50+ devices connected
Like-to-like, WiFi 6 increases the speed for even one device by 40% as compared to WiFi 5. If you get one of the newer laptop built-with Intel’s Gig+ technology, you can instantly double the speeds when matched with right WiFi 6 router.

Myth #4: There are no advantages of upgrading my router to WiFi 6 right away
If your current router is fairly new, isn’t giving you any issues, and you are happy with it, then it’s certainly best to keep it for now and upgrade when the time is right. If you haven’t upgraded your router in a while, your WiFi is slowing to a crawl, and you keep adding more connected devices, then you may consider a WiFi 6 router to help future proof your home. Either way, our Nighthawk WiFi 6 routers do have added benefits over your average AC1200 router: