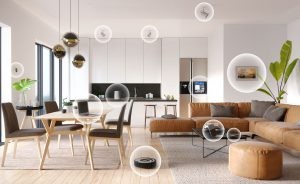 As a species, we all have some basic human needs. Food, shelter, clothing, and love are certainly at the top of the list.

However, these days, this list could reasonably be expanded to include WiFi. Access to the internet is no longer a luxury that only a few require, for minutes at a time. For many of us, the internet has replaced our encyclopedias, our televisions, our radios, our diaries, our maps, and even our traditional higher education schooling.  WiFi enables us to work from home, lower our carbon footprint, and manage daily tasks and our work/life balance. WiFi not only allows us access to entertainment, education, and research, it also has increased our household conveniences and comforts. Gone are the days when we would have to ask a friend to house-sit for us when we leave town, in order to keep our home safe. With WiFi enabled smart home devices, we can now have our lights turn on automatically in the evenings,  check in on and visually monitor our home from another continent, open and close our garage door, and lock and unlock our front doors remotely.

But… where did WiFi originally come from? And, where is this technology headed?

What is WiFi anyway?

WiFi is a technology that uses radio waves to allow you to wirelessly connect to the internet.

You knew that, but did you know that the term “Wi-Fi” is a trademark by the Wi-Fi Alliance, a non-profit organization that makes sure that WiFi products meet the IEEE’s 802.11 wireless standards? The IEEE (pronounced ‘I Triple E’) is a technical organization that is the “trusted voice for engineering, computing and technology information around the globe”.

In short, the IEEE sets wireless standards, and the Wi-Fi alliance ensures that companies make products that meet those standards.

Think all of these are confusing and difficult to remember? The Wi-Fi Alliance thought so too, that’s why they recently introduced a new generational naming system. So, 802.11n is now called Wi-Fi 4, 802.11ac is now known as Wi-Fi 5, and 802.11ax is now known as, you guessed it, WiFi 6.

As all of these standards and protocols progress, so generally does the strength, efficiency and throughput of the WiFi network.

NETGEAR has now put together a very cool and detailed infographic that you can find here, which outlines the exact beginnings of WiFi, from the first original known theory in 1929 by Nikola Tesla, to the technology patented in 1941 by a Hollywood actress and inventor, to 1997 when the first IEEE standard was released, and then all the way to WiFi 6 of today.

With all of the smart devices being used daily in homes across the world, WiFi has truly had to evolve to meet our growing needs.