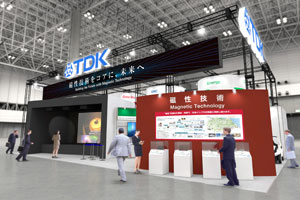 TDK Corporation exhibited many innovative products in CEATEC JAPAN 2014. The starting point of this year’s TDK booth is the “Magnetic Technology zone,” looking back at the history of products based on ferrite which can be seen as the DNA of TDK. From there, the booth flow leads into three zones highlighting the latest applications of advanced magnetic technology: “Energy”, “EMC” and “Data Storage & Sensors”.