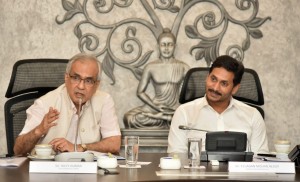 The Chief Minister said, the State expects that NITI Aayog would not dilute or reduce the grants that were due as ‘we have inherited a legacy’ and the previous government has explicitly drafted the Vote-on-account budget of Rs 2.27 lakh cores.

We did not change the quantum of the budget but have changed the priorities and our priority areas are elucidation, medicare and inclusive growth. As the state revenues, central devolution and fiscal deficit cannot be increased or changed, it is only the Central grant that we can expect to be more liberal, he said.
NITI Aayog Vice Chairman Dr Rajiv Kumar said that he was very much impressed with the progress made by the State and was deeply impressed by Navaratnas and the breadth of the vision of Chief Minister and the social capital.

With the Centre aiming at five trillion dollar economy, Andhra Pradesh too would like to be part of the development process with all inclusive growth and want to shape Andhra Pradesh into a model state, the NITI Aayog team was told.

Amma Vodi is a novel scheme where the mother would be given Rs 15,000 per annum for sending her children to school and this scheme can be sponsored by the HRD Ministry which can be emulated by the entire nation. The State is planning for a facelift of government schools in infrastructure and curriculum.
The strengths and challenges of the State were explained in detail by the officials in a power-point presentation details the various initiatives of the state including Village Secretariats, which will be launched on October 2. Human development indicators, social security network, infrastructure, industry and investment and reforms in governance were told in detail. For the first time in the country, the state would be completing conclusive land titles in three years and Village Secretariats will play a vital role.

The assurances given in the State Reorganisation Act, including Kadapa Steel Plant, Polavaram and other issues needs to be expedited and the state plans to reduce the usage of hydrocarbons by bringing in Electrical Vehicles.
Aspiring districts, women and child health, malnutrition, Matsay Abhivrudhi Yojana were among the other things that were discussed during the meeting.

There was some concern over the illiteracy rate, fall in share of manufacturing among other subjects that were discussed during the meeting which was attended by State Ministers Buggana Rajendernath, M Goutham Reddy, Chief Secretary LV Subrahmanyam and others.