Kyocera Corporation (President: Goro Yamaguchi) announced that it has developed an ultra-thin, lightweight (medium-size model thickness: 1mm; weight: 7g) audio device, called “Smart Sonic Sound.” The new product is based on the company’s long history of pioneering fine ceramic technology and utilizes a piezoelectric actuator combined with a special film to create a piezo film speaker. Smart Sonic Sound will not only contribute to making digital devices even thinner – such as flat-screen TVs, PCs and tablets – but also enhances audio quality for a much more realistic audio experience. Its low directivity characteristics broaden the sound projection range, providing 180-degree sound quality and bringing delicate and minute sounds to life. 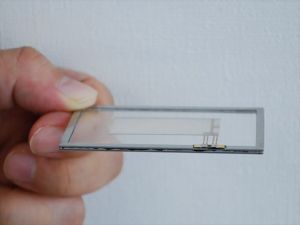 This innovative piezo actuator audio technology is being utilized in a flat-screen television for the first time* by LG Electronics, Inc. in the company’s new 55″ curved-screen OLED TV. Smart Sonic Sound comes in three different sizes (large, medium and small), and Kyocera plans to expand its use in a broad range of applications including digital devices and automotive applications with strict weight requirements.

This is the second audio innovation from Kyocera in recent years. The company launched the award-winning Smart Sonic Receiver in early 2012, revolutionizing how sounds are heard exclusively on Kyocera mobile phones for the Japan and U.S. markets. Smart Sonic Receiver uses a ceramic actuator to send vibrations via tissue conduction and traditional air conduction through display screens without the need for a traditional earpiece or loudspeaker, making it ideal for clear audio in exceptionally noisy environments. The new Smart Sonic Sound technology uses the same base technology but with a different implementation that amplifies air conduction.

*The world’s first use of a ceramic piezoelectric actuator as the sound device for a flat-screen television. As of July 31, 2013; based on research by Kyocera.