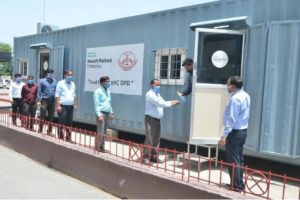 Hewlett Packard Enterprise (HPE) announced that it has provided free tuberculosis (TB) screening services to more than 50,000 patients, as at November 2020, through its nine eHealth Centers (eHCs) located across Assam, Chandigarh, and Uttar Pradesh.

Last year, in support of the government’s target to make India TB-free by 2025, HPE signed the TB pledge with USAID to utilize its network of eHealth Centers to screen 50,000 symptomatic patients for TB. The aim was to target the “missing TB” cases, namely people who unknowingly carry and spread the disease. The diagnosed patients are referred to the nearest DOT (Directly Observed Therapy) center.

“The Government of India has been continuously working to end tuberculosis across the country by 2025, five years ahead of the global Sustainable Development Goal targets of 2030. To accelerate this journey, the collaborations between government agencies and private sector are extremely critical. We congratulate HPE for reaching the milestone of 50,000 TB screenings via their network of e-Health Centers. We look forward to working with USAID, The Union and other stakeholders contributing towards a TB Free India,” said Dr Kuldeep Singh Sachdeva, Deputy Director General – Central TB Division, Ministry of Health and Family Welfare, Government of India.

“As an organization we stand as being a force for good in communities where we live and work,” said Som Satsangi, MD – India, HPE. “By providing free diagnostic services to suspected TB patients through our innovative cloud-enabled eHealth Centers, which bring affordable healthcare to remote areas of the country, we are delivering on our commitment to work towards a TB-free India.”

“USAID is pleased to learn that HPE, a Platinum Member of the Corporate TB Pledge, a joint initiative of USAID and the Ministry of Health and Family Welfare, has been able to test 50,000 people for TB over the past year. This is a commendable achievement and we hope more companies follow the path that HPE and other companies are taking to help India reach its goal of ending TB in 2025,” said Sangita Patel, USAID/India Health Office Director.

“It is a great moment for the Corporate TB Pledge (CTP) initiative to have its Platinum partner, HPE, achieve the momentous milestone of 50,000 TB screening. The USAID-supported CTP initiative provides a platform to corporations to contribute towards the larger TB-elimination initiative and this milestone is an inspiration to its members and every corporate in the country. The corporate sector brings in the resources and reach which is augmented by the technical support by The Union in TB prevention and enables us to meet the existing gap towards TB elimination,” said Prabodh Bhambal, Deputy Executive Director, International Union Against Tuberculosis and Lung Disease (The Union).

The HPE eHCs provide affordable and preliminary healthcare in remote areas that have no immediate access to primary healthcare. Since 2012, HPE has installed over 140 cloud-enabled eHCs across 20 states in India. To further increase the reach of primary healthcare in underserved areas, HPE has deployed more than 150 mobile eHCs. These eHCs have collectively facilitated over 1 million patient visits across India.