HONOR has achieved explosive growth since its establishment. In 2017, HONOR became the top smartphone e-brand in China, and the brand has expanded its worldwide footprint. Its international sales grew significantly over the past year. And as of January 7, 2019, the number of HONOR fans has exceeded 1 million in overseas market！ With a new branding campaign in the New Year, HONOR builds up connection among global youth and provides an equal and energetic community where the youth are encouraged to share ideas and chase their dreams. Until now, there are 20 HONOR Clubs and 50 fans events were held in overseas markets, 10 million people have visited the HONOR Club, and more than 650,000 interactive posts were generated.

“As a leading e-brand, HONOR’s mission is to create an intelligent world designed with the needs of young people at heart,” said Mr. George Zhao, President of HONOR. “HONOR’s goal is to grow and reach new markets, so that we can bring unparalleled technology, richer and more diverse life experiences and exceptional style to fans around the globe.”

HONOR View20 also comes with an advanced 3D rear camera, which can scan and recognize real world objects. The AI and 3D modelling algorithm enables a series of useful and interesting applications, from making your body slimmer in photos and videos, to playing motion sensing games and calculating calories in food.

HONOR View20 is the first model to be equipped with advanced 7nm Kirin 980 AI chipset with dual NPU to overseas market; GPU Turbo 2.0, which greatly improves graphic performance; and a 4,000 mAh battery with SuperCharge.

The Kirin 980 chipset represents a 75% improvement of speed in single core performance compared to the previous generation. The Kirin 980 also includes Mali-G76 GPU to improve performance by 46%. HONOR View20’s performance has significantly increased, while reducing its energy consumption by 58%, providing a revolutionary advancement in user experience.

With the high demand for power that comes with HONOR View20, HONOR engineers developed an innovative The NINE Liquid Cooling Technology which is a highly efficient liquid cooling system that can more effectively dissipate heat for performance.

The cutting-edge smartphone is equipped with a front-facing 25MP camera integrated into the display. The innovative All-View display provides a notch-less viewing experience and a stunning 91.8% screen-to-body ratio.

HONOR View20 has adopted a special technique enabling light to go through and reach the front-facing camera seamlessly. HONOR engineers use advanced holder with buffer design to precisely place the front camera under an ultra-small 4.5mm transparent hole on the screen. A proprietary display bonding material is used to prevent light emitted by the display from entering the camera, enabling the best photos possible from a smartphone.

Mr. George Zhao continued: “HONOR’s View series brings ground-breaking technology and flagship performance to users. With HONOR View20, we’re pushing the boundaries of what’s possible in a flagship smartphone. We are deeply proud of View20, a beautiful amalgamate of innovation, power, and function – and a phone that boldly underscores HONOR’s distinguished reputation and commitment to elegant design.”

Next generation in design and aesthetics

From a design perspective, HONOR View20 is the first smartphone to use advanced nanolithography technology to develop an invisible nano texture on the phone body. The fourth generation of nano-vacuum coating and invisible aurora texture process create a vivid and dynamic V-shape color gradient with a gleaming effect, breaking the mold of traditional flagship smartphones in dimension and style.

At CES, HONOR has also announced a new phantom blue color for HONOR 8X which has a 2.5D double texture aurora glass body with a grating effect, providing an elegant and smooth look and feel. Since its launch last September, HONOR 8X has globally sold over six million units. Overall, the X Series has sold over 50 million units worldwide. 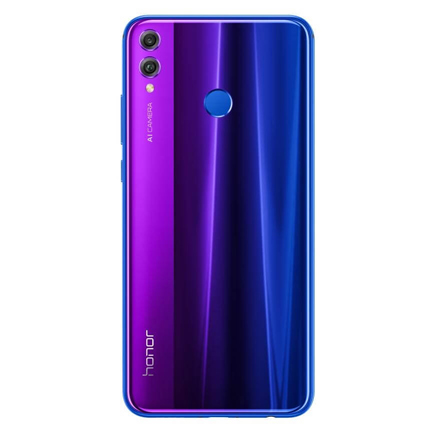 The enormous success of HONOR’s latest smartphones and the rapid growth in popularity of the brand have been driven by the company’s ceaseless dedication to providing industry-leading innovation and design, which continue to win accolades all around the world.