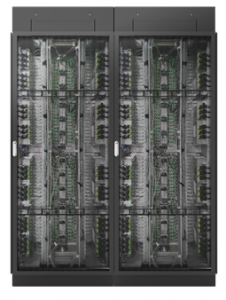 Fujitsu Limited today announced that it began shipping the supercomputer Fugaku, which is jointly developed with RIKEN and promoted by the Ministry of Education, Culture, Sports, Science and Technology with the aim of starting general operation between 2021 and 2022. The first machine to be shipped this time is one of the computer units of Fugaku, a supercomputer system comprised of over 150,000 high-performance CPUs connected together. Fujitsu will continue to deliver the units to RIKEN Center for Computational Science in Kobe, Japan, for installation and tuning.

By developing Fugaku, Fujitsu has accumulated various technologies and know-how, including cutting-edge development, system integration, simulation, and AI. Utilizing its supercomputing technologies, Fujitsu is contributing to resolve social issues, promote innovative research, apply such technologies in DX (Digital Transformation), and enhance its industrial competitiveness, including new drug development and the realization of a safe society through disaster prevention and mitigation.

The supercomputer Fugaku is a very large system, in which more than 150,000 high-performance CPUs A64FX(1) developed by Fujitsu based on the Arm instruction set architecture are connected by a high-speed network Tofu Interconnect D(2). In pursuit of superior performance and high reliability, Fujitsu has concentrated its advanced technologies and developed the supercomputer together with RIKEN.

Fugaku is manufactured by Fujitsu IT Products Ltd., and the units, to be shipped for the first time on December 2, will be delivered to RIKEN Center for Computational Science in Kobe, Japan.

Image of computer units that make up Fugaku

Fugaku has been developed with the aim of achieving up to 100 times the application performance of the K computer with approximately 3 times the power consumption. With the highest energy-efficiency in the world, a prototype of the system received the No.1 position in Green500(3) at SC19, the International Conference for High Performance Computing, Networking, Storage, and Analysis, held in Denver, U.S., from November 17 to November 22.

Fujitsu will continue to deliver computer units of Fugaku and carry out installation and tuning in preparation for the start of general operation between 2021 and 2022. At the same time, by globally providing the commercial Fujitsu Supercomputer PRIMEHPC FX1000 and PRIMEHPC FX700 that the company has developed by utilizing the technology of Fugaku, Fujitsu will promote solutions to social issues and cutting-edge research, such as in drug development and the realization of a safe society through disaster prevention and mitigation. Fujitsu will also provide these products to a wide range of customers in a variety of industries, thereby contributing to the application of these products to the DX field and strengthening corporate competitiveness.