Epson, the India No.1* Projector & World’s top projector maker for 13 years in a row**, has once again broken barriers to develop the world’s first 3LCD interactive projector that features finger-touch capabilities. While in some ways it is a successor to the EB-400 interactive series of projectors, the EB-595Wi has carved a niche all for itself through the integration of finger-touch operation 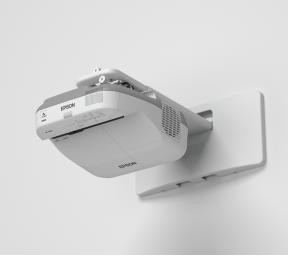 In addition to operation using conventional interactive pens, the EB-595Wi allows for operation simply by touching the screen with a finger. This includes opening and closing of files, page scrolling, moving and expanding objects and annotation, giving users a previously unheard of ease of control over their presentations and even allowing them to make PC-free annotations literally at the touch of a finger.

Versatile and revolutionary, the EB-595Wi will be a welcome addition to classroom discussions, adding an element of engagement for students that previously did not exist. In the office, the EB-595Wi will allow for greater collaboration and brainstorming as the PC-free interactive mode allows two people to write simultaneously, with two fingers and two pens operating at the same time, for greater interactivity.

With the incorporation of these revolutionary new features to existing, well-loved functions such as Multi-PC projection, iProjection and the PC-less interactive functionality, The EB-595Wi is breaking new ground in both classrooms and offices.

In addition to the EB-595Wi that has carved a niche all for itself through the integration of finger-touch operation, Epson has also launched its line of Pen Interactive Projector – the EB 595WI & the Ultra Short Throw Projector the EB 585W. Epson launched all these projectors at InfoComm India 2014.

Features in detail:
World’s First 3LCD Finger Touch Interactive Projector – Presentations just became so much easier to control with the world’s first 3LCD finger touch interactive projector. This revolutionary technology allows users to scroll, press and tap, pinch in/out and rotate images using only their fingers, even in wireless projection. Simply use the interactive pens for adding notes or writing and let your fingers do the rest.

PC-Free Interactive Functionality – A unique feature to Epson projectors, this original feature allows users to electronically annotate documents without any driver installation or PC connection to create compelling presentations. The PC-free interactive mode allows two users to write simultaneously, with two fingers and two pens operating at the same time for greater interactivity. Furthermore, with the incorporated EIT3.05 software, brainstorming sessions can be brought to another level, as the software enables six fingers and two pens to work together simultaneously.

Uninterrupted Presentations – With many interactive projectors, issues of shadow interference and obstruction are always present. Epson’s ultra-short throw projection eliminates many of these common problems by reducing the throw ratio to only 0.27, meaning that the EB-595Wi needs only 47cm to project an 80-inch screen.

New Interactive Pens – Designed to facilitate an easy grip for both children and adults, the new interactive pens work like a computer mouse and even incorporate a side button, with can be allocated to various functions, for quick and easy access and increased usability.

Wide Range of Connectivity – The new Epson EB-595Wi was created to be fully compatible and completely versatile. It’s advanced connectivity features mean convenient and hassle free projections, with its wide ranging interface allowing for correspondence not only with multiple conventional analogue sources but also HDMI input. In addition, one of the two HDMI input terminals is Mobile High-Definition Link (MHL) Enabled. This means that media can be accessed at any time from the nearest MHL supported Android device.

Announcing the launch, Mr. Samba Moorthy, Director-Sales & Marketing, Epson India, said, “As leaders in the projector segment, we have always introduced products that have been game changers in the industry. We are pleased to announce the launch of the world’s first finger touch interactive, ultra-short-throw projector that will address the requirements of our customers in the education segment. With the EB-595Wi, students can maximize their learning through technology in classrooms.”

The EB-595Wi is also capable of Multi-PC Projection, allowing up to 50 terminals to be connected while a host PC plays moderator, selecting media from up to 4 terminals to be projected simultaneously.

Wireless projection is also an option, with the Epson iProjection application for both iOS and Android. This feature supports various files and allows for presentation from a smart device.