Emerson Network Power, a business of Emerson and a global leader in maximizing availability, capacity and efficiency of critical infrastructure,announced the launch of the ‘Diwali Delights’ scheme for its channel partners in India. Emerson has unveiled this monthly scheme to boost demand and reward its partners on the sale of its uninterruptible power supply UPS systems (up to 20kVA) and its datacenter infrastructure management (DCIM) and rack data unit (RDU) products. 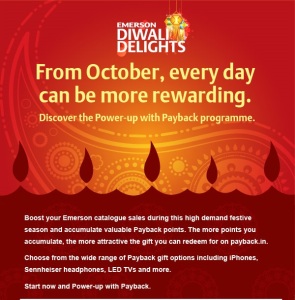 Diwali Delights will be run in partnership with Payback and partners will be able to redeem their points from over 50 PAYBACK partner brands. Network Solution Partners (NSPs) and Value Added Resellers (VARs) will gain PAYBACK points with the sale of the solutions listed under the program and they can exchange the points in return for attractive rewards. The ‘Diwali Delights’ program is valid for a period of one month starting October 1, 2014 to October 31, 2014.

The scheme will be valid for purchases made from Emerson’s national distributors, Ingram Micro, and neoteric infomatique ltd. Partners can view their points by logging on to www.PAYBACK.in with the PAYBACK number provided to them by Emerson after registering themselves at www.EmersonNetworkPower.co.in/Channels with a login id and password.

Commenting on the scheme, Ankesh Kumar, director of marketing at Emerson Network Power in India said, “Our recently launched initiative of incentivizing partners with PAYBACK points received an overwhelming response from the channel community and our Diwali Delights scheme is based on similar model to motivate partners. We hope that this monthly scheme will benefit partners during this high demand festive season along with enabling them to redeem their rewards with exciting gifts from PAYBACK including iPhones, Sennheiser headphones, and LED TVs.”