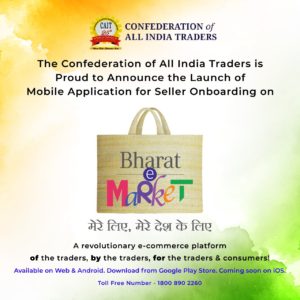 The E-commerce application BharateEMarket launched by the Confederation of All India Traders (CAIT) at New Delhi has received unprecedented response from the people of India. Within 24 hours of launch more than 30 thousand sellers across Country have registered on the platform whose E-dukan will be created from 15th March. More than 75 thousand persons hit the App in last 24 hours and this process will be increased day by day- said Mr Praveen Khandelwal, Secretary General of the CAIT.
Praveen Khandelwal, CEO, Fairdeal Group & National Secretary General, CAIT, said, “Such a phenomenal response from the traders of India is ample testimony to the fact that the people of India were waiting for an opportunity to look for an alternate platform which truly empowers their business and is purely “ Bhartiya”.  The clarion call of PM Shri Narendra Modi of vocal for local and Atmnirbhar Bharat is the guiding spirit for the CAIT. “ We are committed to make BEM, the largest portal of the World by enrolling 1 crore traders from all over India. Currently, Alibaba of China is the largest portal reported to have about 80 lakh sellers.”
CAIT President BC Bhartia added, “Such a rousing response to BharatEMarket proves that foreign multinational e-commerce giants operating in India were not giving a fair opportunity for Indian sellers to thrive. They were giving preferential treatment to a select group of sellers and were controlling the inventory on their platforms. Now with BharatEMarket, Indian traders will grow handsomely and prove their mettle in Indian e-commerce.”
Both Bhartia & Khandelwal said that very soon we will launch another mobile app for on-boarding of consumers from all over India and we intend to launch BEM portal by 3rd week of April when transactions will start happening on the portal. The CAIT has nominated 40 senior most trade leaders of the Country as “Brand Ambassadors “ of Bharatemarket who will began travelling in different states and union territories of the Country from 14th March . Mr Bhartia informed that the travelling movement will be started by Mr Khandelwal himself who will go to Gujarat on 14th March.
Puneet Singhal, President, CMDA and Viren Bavishi, General Secretary, TAIT have been appointed as Brand Ambassadors of this platform.