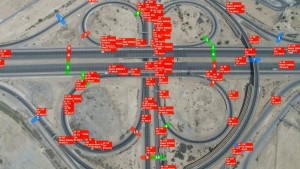 Traffic. It’s one of the most commonly cited frustrations across the globe.

Because time is too precious to waste, RCE Systems — a Brno, Czech Republic-based startup and member of the NVIDIA Inception program — is taking its tech to the air to improve traffic flow.

AI in the Sky

Traffic analysis has traditionally been based on video footage from fixed cameras, mounted at specific points along roads and highways.

This can severely limit the analysis of traffic which is, by nature, constantly moving and changing.

Beyond monitoring objects captured on video, the DataFromSky platform interprets movements using AI to provide highly accurate telemetric data about every object in the traffic flow.

These specialized neural networks can then recognize objects of interest and continually track them in video footage.

The data captured via this AI process is used in numerous research projects, enabling deeper analysis of object interaction and new behavioral models of drivers in specific traffic situations.

Ultimately, this kind of data will also be crucial for the development of autonomous vehicles.

The DataFromSky platform is still in its early days, but its impact is already widespread.

RCE Systems is working on a system for analyzing safety at intersections, based on driver behavior. This includes detecting situations where accidents were narrowly avoided and then determining root causes.

By understanding these situations better, their occurrence can be avoided — making traffic flow easier and preventing vehicle damage as well as potential loss of life.

Toyota Europe used RCE Systems’ findings from the DataFromSky platform to create probabilistic models of driver behavior as well as deeper analysis of interactions with roundabouts.

And the value of RCE Systems’ analysis is not limited to vehicles. The Technical University of Munich has used it to perform a behavioral study of cyclists and pedestrians.

RCE Systems is looking to move to NVIDIA Jetson AGX Xavier in the future to accelerate their AI at the edge solution. They are currently developing a “monitoring drone” capable of evaluating image data in flight, in real time.

It could one day replace a police helicopter during high-speed chases or act as a mobile surveillance system for property protection.