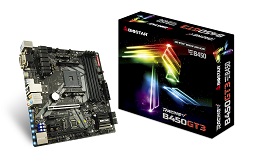 BIOSTAR, a leading brand of motherboards, graphics cards, and storage devices, today announces support for the latest AMD Ryzen 3 3100 and Ryzen 3 3300X processors on their RACING B450GT3 and B450MH motherboards.

With AMD announcing the new 3rd generation Ryzen processors built on their Zen2 architecture, the Ryzen™ 3 3100 and Ryzen™ 3 3300X processors have taken the tech industry by surprise with their superior performance with jaw-dropping price points. AMD Ryzen 3 3100 and 3 3300X processors are faster and more efficient than anything their counterpart has to offer at this moment because of AMD’s superior 7nm process, allowing higher boost frequencies which are set at 3.9GHz on the 3100 and 4GHz on the 3300X. These 4 Core 8 thread Processors coupled with SMT (simultaneous multithreading) which is a first for Ryzen 3 processors make these chips better suited for content creation roles and could help with games built on more modern engines as well.

The best part about these processors is the fact that the AM4 platform they are designed in making them compatible with the current B450 motherboards with a BIOS update which means with a good B450 motherboard, you can now experience smooth and fast gaming experience with popular online games such as DOTA2, Fortnight, or League of Legends.

Consumers looking for a quick upgrade to their already existing AMD based system or even a new PC is built can now rest assured as BIOSTAR announced that their RACING B450GT3 and B450MH motherboards are fully capable of running the Ryzen 3 3100 and Ryzen 3 3300X processors just by updating the latest BIOS version, available now to download on the dedicated support pages designated for them in the official BIOSTAR website.

BIOSTAR has released some of the benchmark results from the in-house tests they ran using the RACING B450GT3 and B450MH motherboards using the new 3rd gen Ryzen processors and had some amazing benchmark results compared to the test scores released by AMD, matching and sometimes even exceeding the numbers AMD showcased with these amazing chips.