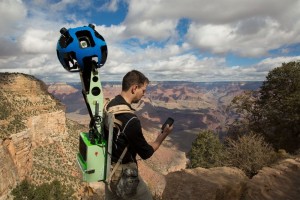 Fifteen years ago, Google launched Google Maps as a useful way to help people get around. Working on Google’s geo efforts for more than 15 years, watching Maps grow into what it is today has been an unbelievable experience. As they added features and capabilities, Google Maps has evolved into much more than a website that gives you turn-by-turn directions. Today, it’s a gateway to exploring the world—both digitally and in real life, on foot or by car, via public transit or a wheelchair.

Pardon the pun, but it’s been a long road! And in honor of Google Maps’s birthday, they are looking back at some of the most important and exciting moments along the way.

1. Google Maps is born. On Feb 8, 2005, Google Maps was first launched for desktop as a new solution to help people “get from point A to point B.” Today, Google Maps is used by more than 1 billion people all over the world every month.

3. Delivered to developers. It’s difficult to imagine a time when sites all over the web didn’t embed Google Maps into their pages—but it wasn’t until mid-2005 that the Google Maps API was announced. Today, more than 5 million websites and apps use Google Maps Platform every week.

4. Google Trip Planner takes on Portland. In December 2005, Portland, Oregon became the first city to use Transit Trip Planner, helping commuters see public transit schedules and routes. It started as a standalone product but was eventually folded into Google Maps. Over the years, the feature made its way to cities across the globe.

5. Real-time traffic news. Nobody likes traffic—but traffic updates are another story. About two years after launching Google Maps, we introduced real-time info on traffic conditions for more than 30 U.S. cities. And so the phrase “there’s a lot of red…” was born.

6. Take it to the Street View. May 29, 2007 marked the debut of Street View, which has become a much-beloved part of Google Maps. To collect imagery for Street View, we’ve strapped cameras to everything from snowmobiles to camels, and in total, captured more than 10 million miles.

7. Maps goes mobile. Yes, there was a time before smartphones could direct you anywhere and everywhere. In November 2007, Google Maps made the leap from desktop to mobile phones and was first available for Blackberry and Palm devices. In 2008, our first Android app launched, followed by the iOS app in 2012.

8. Navigation gets the green light. In 2009, a welcome update to Maps brought turn-by-turn navigation to the app. No more getting lost after you missed a turn!

9. Street View Trekker takes us to new heights—literally. You might have thought Street View was already capturing unusual places, but in 2012 we introduced the Street View Trekker, bringing all the high-tech equipment needed to capture imagery into a backpack. We first took the Trekker out to explore the Grand Canyon, and since then it’s captured imagery from hard-to-reach places like the Amazon rainforest and the top of the Eiffel tower.

10. Say hello to hidden gems. Google Maps isn’t only about exploring the globe; we’ve also loved helping people find out what’s in their own neck of the woods. Building on our longstanding work to provide relevant local information, in 2014, we made it easier to browse information like hours, ratings and prices about restaurants, bars and hotels. Today, you can see these sorts of details for about 200 million businesses and places worldwide—right from your Explore tab.

11. Taking care of businesses. We’ve always made it a priority to help businesses share relevant information on Google, and in June 2014, we made that even easier with Google My Business. It’s a one-stop-shop for business owners to manage their presence on Google Maps and Search by updating their business info, adding photos, responding to reviews and more.

12. No connection? No problem. In November 2015, we launched offline maps, so that even when you don’t have connectivity, you can still get turn-by-turn driving directions, search for specific destinations and find useful information about places.

13. Meet your Local Guides. In the same month, we introduced the Local Guides program, a passionate community of users (now 120 million Local Guides strong!) who share reviews, photos and knowledge about places around the world.

14. Have wheelchair, will travel. In March 2018, we brought wheelchair-accessible routes to Google Maps to make transit and navigation easier for those with mobility needs. Today, Google Maps includes accessibility info like wheelchair-friendly entrances and restrooms for more than 50 million places around the world.

15. And we’re live—with Live View. Last February, we announced Live View, which uses augmented reality to help you understand which way to walk, with arrows and directions clearly overlaid on your view of the world.

The world is constantly changing, and so is the way we get around in it. And as it does, Google Maps will be there every step of the way, building new tools that help you navigate, explore and get things done, wherever you are.