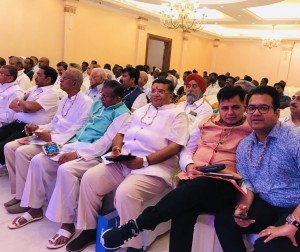 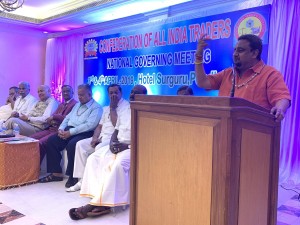 Under the umbrella of the Confederation of All India (CAIT) more than 200 prominent trade leaders of the Country belonging to 26 States began their two days National Conference today at Pondicherry to decide the role and strategy of trading community In forthcoming Lok Sabha elections . The trade leaders unanimously decided that the party or parties which will recognise the Traders National Charter will be outrightly supporting and voting such party.

There are about 40 thousand Trade bodies across Country which collectively represents more than 7 crore traders across Country. More than 30 crore people are dependent upon these traders for their livelihood as employees etc thereby constituting one of the largest vote Bank in the Country.

While commenting on manifesto of Congress CAIT National President Mr B C Bhartia & Mr Praveen Khandelwal said that it has not given any priority to traders and have sum up the issues in just two lines related to abolition of E way Bill and one single rate of GST.

Saying about Congress Manifesto declaring that no permission will be required for first three years of conducting any business, the trade leaders said that it is quite illogical and can’t be implemented as traders have to comply with various Acts and Rules passed by the Parliament under which different types of licenses, permissions are required to obtain. Various Acts are such as GST Act, Food Safety & Standards Act, Shop & Establishment Act, Trade Licenses Act and many others. Without amending these Acts by Parliament & other legislatures , necessary licenses and permissions are mandatory for any trader. Merely making an announcement do not hold good and therefore it’s a lofty promise which do not stands on test.

Both Mr Bhartia & Mr Khandelwal said that however the traders are fraught with various burning issues which are totally overlooked by Congress. Issues like FDI in retail, e Commerce , National Trade Policy for Retail Trade, better infrastructural facilities in markets, growth and development of domestic trade in the Country, encouragement to traders for enhancement in exports are the subjects which must have received attention of Congress party. The trade leaders are highly disappointed with manifesto of the Congress and strongly condemn the approach of Congress Party towards business community of the Country.

Speaking about the deliberations held today at the Conference, CAIT  Mr B C Bhartia &  Mr Praveen Khandelwal said that traders have been grossly neglected so far in political spectrum of the Country and therefore the trade leaders at the Conference decided to play a crucial role in forthcoming elections and will vote collectively as a vote bank to the party or parties who will commit to bring the business community on its priority . After analysing the response of the parties, the CAIT will issue a mandate. The CAIT is drafting a National Charter of Traders which will be released soon and will be sent to all political parties.